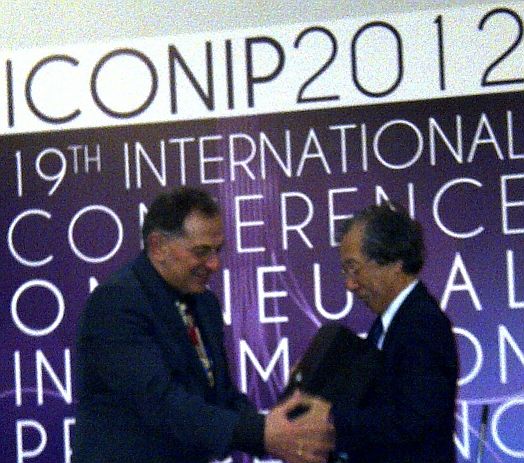 Prof. Nikola Kasabov was awarded the 2012 ‘Outstanding Achievements Award’ of the Asia Pacific Neural Network Assembly (APNNA, http://apnna.net).
This is the highest award given once a year by APNNA to a prominent scientist for his/her overall scientific contributions to the area of neural networks. The award was given to Prof. N. Kasabov by the Chair of the APNNA Award Committee, Prof. S. Amari at the ICONIP 2012 conference (Int. Conf. on Neuro- Information Processing) held 12-15 November 2012 in Doha, Qatar.
So far, this award has been received by only a few scientists, among them Amari, Kawato, Usui, Fukushima, Guo, and Xu.